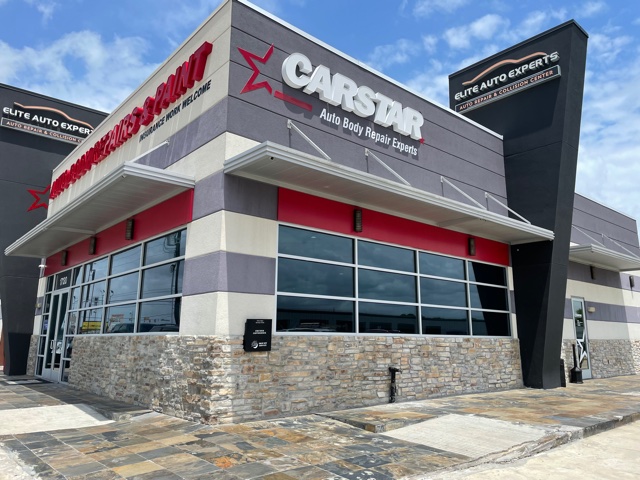 At The Body Shop

At CARSTAR Elite Collision, we provide the highest quality auto body repair. We offer 24/7 accident support and towing assistance to get you back on the road quickly. Our collision center in Houston , TX provides dent repair, dent removal, storm damage repair and other services. We repair all makes and models, work with most insurance companies and offer a nationwide warranty.

CARSTAR offers a process called paintless dent repair, a cost-effective solution for removing small dents and dings. This is a great option for minor, unsightly damage caused by shopping carts, hail storms, or other unexpected bumps in the road. The size and location of the damage will determine if this is the appropriate technique to repair your vehicle. This is typically a two to three day repair.
Read more about Specialists in A/C Repair near Houston
Schedule online appointment for our auto body shop on carwise.com - Find our Auto Body Shop on carwise.com
Hail Damage Car Repair Houston Services

CARSTAR is here to help when nasty storms strike! From 24/7 assistance to cost-effective paintless dent repair, we are committed to getting your car back in pre-storm condition.
Read more about Specialists in A/C Repair near Houston
Schedule online appointment for our auto body shop on carwise.com - Find our Auto Body Shop on carwise.com

More Services at This Collision Center

Wherever you and your vehicle go, you can trust your vehicle repair to CARSTAR. We stand behind our work with a CARSTAR Limited Nationwide Warranty* on qualifying repairs. If you move to a new city or happen to be traveling, you are covered and if there is not a CARSTAR nearby, we will find a convenient location to honor the warranty.

*Please refer to the official CARSTAR Warranty Document (if provided by the CARSTAR location at the completion of the repair) for specific coverage and excluded items.

Whenever you need auto body repair, we are here to help. Call us toll-free at 1-800-CARSTAR to speak with our trained representatives. We are here 24 hours a day, seven days a week to offer help when you need it most. We can call your insurance company, get your vehicle towed for repairs and contact a friend or family member for you. You can relax, CARSTAR will take it from here.

Work was completed on time and the body work look good

I had an amazing experience. The repair was done within the time and price quoted in the initial estimate. The price was very reasonable

Took two weeks to get a drop off time agreed. Was told someone would call me each time I called. At one point I was told to drop it off that afternoon, but call before I come. When I called, I was told that afternoon would not work and someone would call me. No one called for two weeks. When it was time to pick it up, I was told Monday evening that it would be done Thursday. Was called Tuesday and said it would be done Wednesday. Wasn't ready Wednesday, same thing for two more days, because they were waiting on a sticker. I did not get the call that it was ready for 5 days basically from the time I was told it would be ready.

My vehicle was repaired perfectly. The customer service and status updates were very great!

Very quick turn around on the repairs, even with a holiday during the week.

Was a good experience working with you

Mario was great with his customer service and attention to details

I am pleased with quality of work on my car as well as service I received from staff specially John Reyes. John kept me updated with my repair work.

Thanks to everyone for making my experience easy. Very professional team.

Very kind and Helpful from on the phone to in person. Love the customer service

At CARSTAR, we aim to make the process of getting your car repaired easy by offering rental vehicles at competitive prices.

A Family of Driven Brands