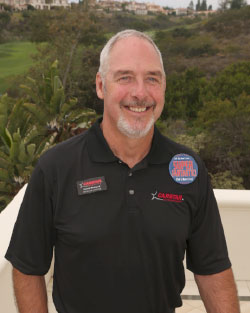 Wicklund was recognized by Body Shop Business as the 2015 Single-Shop Executive of the Year. The award, which has been handed out since 1984, recognizes true collision repair “visionaries” who have experienced great success through innovative thinking, overcoming challenges and persevering.

“CARSTAR Wicklunds Collision Center was the very first CARSTAR store, and Gerald has literally grown up in this business,” said David Byers, CEO of CARSTAR Auto Body Repair Experts, which is headquartered in Kansas City. “He is, without question, a leader among our shop owners, and a leader in the collision repair industry. We are extremely proud to see such a well-deserving person honored with this recognition.”

Gerald Wicklund started in the family business when he was 12. By the time he was 18, he was working in the shop as a painter’s helper and doing small body repairs. In 1980, he became the head painter, then became an estimator in 1986. He took over as general manager in 2000, then formally became owner in 2012.

“When I got the call, I was dumbfounded,” said Wicklund. “I just couldn’t believe that it was happening. I had just returned from Okinawa, Japan, and then I got a week’s notice that I’m going to Detroit for NACE, where the award will be presented. I’ve received numerous emails and congratulatory remarks from people all over. I really appreciate all of the kind words and hard work that has gone into us being recognized.”

What is now CARSTAR Wicklunds Collision Center originally opened in 1970. Nearly 20 years later, the shop signed on as the first ever CARSTAR franchise location when the company founded in 1989. Over the years, it has grown into a modern 18,000 square foot shop.

Part of the shop’s success can be credited to the fact that Wicklund has always kept his shop on the cutting edge. His shop is the first in his area to earn an aluminum repair certification. His location is also certified for Mopar, Ford, GM and Honda collision repairs.

To this day, CARSTAR Wicklunds is a family business that spans multiple generations. In fact, three generations of Wicklunds are currently working at the shop. Gerald’s mother refuses to retire. She helps to make sure their I-CAR certifications stay current, and acts as Gerald’s right hand when he needs help. His daughter works as a detailer. One of his sons is an estimator, and the other is in charge of production and is learning how to run the shop. Wicklund also considers his employees his family. It’s not uncommon for him to involve everyone in the shop for charity events or outings.

Over the years, Wicklund has earned numerous industry recognitions, including the 2013 CARSTAR Marketing Award, 1994 and 2013 Liberty SERTOMA (Service to Mankind) Award; and Best of the Northland for the past seven years.

Wicklund has also dedicated his career to giving back to the industry, serving as a SkillsUSA judge from 2008 to 2012, CARSTAR Advisory Board member, and other positions. He also hosts firefighter extrication classes and military appreciation events at his shop.