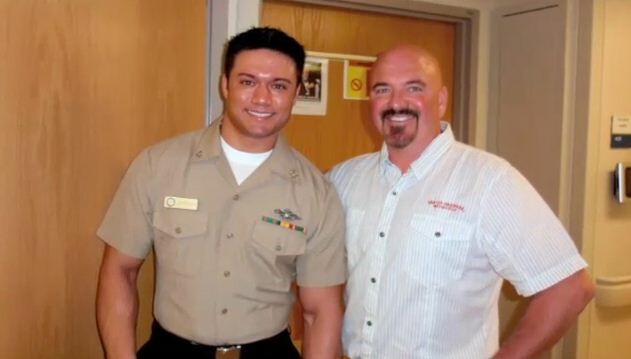 OVERLAND PARK, KS (June 12, 2012) – For Jim Marshall, giving back to the troops isn’t just part of his commitment to serving his community. It’s part of his ongoing service to his country.

For Jim Marshall, giving back to the troops isn’t just part of his commitment to serving his community. It’s part of his ongoing service to his country.

The former Air Force F5 air craft mechanic and crew chief, trained in missions and served in 19 countries before returning home to the family business. He owns Marshall’s Autobody CARSTAR in Billerica, MA, and works closely with iPods for Wounded Veterans to help wounded veterans in need.

iPods for Wounded Veterans is a charity dedicated to helping wounded service men and women by providing a diversion and easing the boredom of recovery by donating iPods, iPads, eReaders and other materials that improve their quality of life.

Jim Marshal has been supporting iPods for Wounded Veterans since November 2011, collecting donations from customers, vendors, friends, family and other local businesses, totaling more than $15,000 for the program.

“People want to help, they just need the avenue and direction,” said Marshall. “The gift of an iPod, iPad, Nook or Kindle, or even magazines and books, provides much needed distraction from the grueling rehabilitation processes these soldiers face.”

The iPod for Wounded Veterans team also gets the honor of delivering these much appreciated devices and reading materials to the Walter Reed National Military Medical Center in Bethesda, MD, and other military and veterans’ hospitals around the country. Marshall recently accompanied the team on a trip to Walter Reed and Ft. Belvoir, in Virginia.

“I was prepared for the injuries but I wasn’t prepared for the families’ reactions,” said Marshall. “I came to the realization that it wasn’t the gifts that mattered, but rather the visit and appreciation from strangers.”

During the trip, Marshall and other members of the team visited with and presented soldiers with iPods, iPads, eReaders, as well as letters from children, books and magazines.

Supporters like Marshall’s Autobody CARSTAR and Hudson News, who donated $62,000 in magazines, are what enable the program to continue growing. Marshall foresees continued success for the program and the potential to expand nationally.

“Working with CARSTAR, we can have an incredible impact on the lives of wounded veterans,” said Marshall. “Together, we can make a difference while thanking our men and women who have sacrificed so much.”