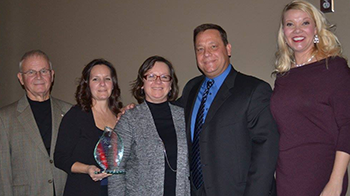 Ralston, Nebraska Don & Ron’s CARSTAR was named “Business of the Year” by the Ralston Area Chamber of Commerce. Don & Ron’s received the award at the Chamber’s Annual Awards Banquet and Auction held in early December.

“It is seriously one of my favorite nights of the year just to bring everything to a close for a wonderful 2015,” chamber President Tara Lea said. “It is so nice to pick a few businesses and highlight what they do throughout the year.”

This is the first time this family owned body shop won this prestigious award.

“We are thrilled to receive this award for the business my father and uncle started,” said Christi Krzemien Krajeski. “It is a great honor to be recognized by the Chamber. Don and Ron’s has been part of the Ralston community for over 50 years.”

The Ralston body shop recently expanded by moving their office in the strip mall at 72nd & Q. This allowed the original building to expand production space to accommodate more vehicles and technicians.

Don and Ron’s CARSTAR auto body repair was founded in 1965. Don & Ron’s is part of the CARSTAR franchise network which is the largest group of branded auto body shops in North American.