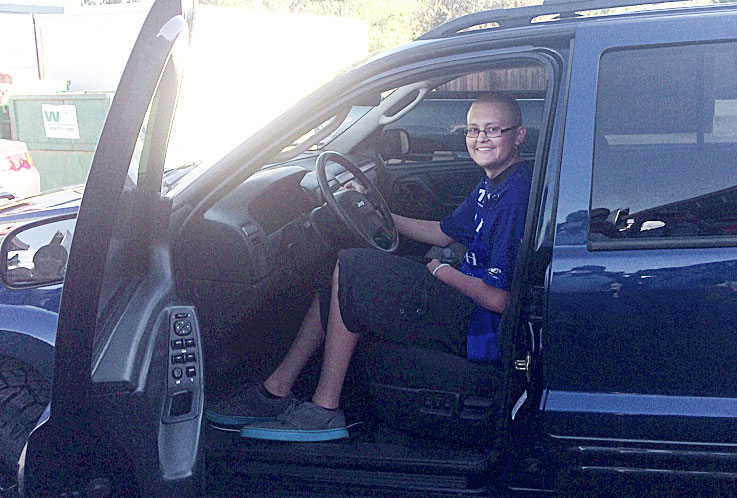 DENVER, CO (September, 2014) – The Colorado CARSTAR Auto Body Repair Experts helped make the wish of Jason, a local teenager, come true. Jason, the owner of a 2004 Jeep Grand Cherokee, had submitted as his wish to the Colorado Chapter of Make-A-Wish® Foundation of America for a makeover of his vehicle. Steve Rigsby, marketing manager for the 11 Colorado CARSTAR locations, was contacted by Make-A-Wish and the wheels were set in motion.

“The car was in pretty bad need of a paint job,” according to Rigsby. “There was some bodywork that needed to be done, and tires were in bad shape. It was a little run down.”

The Jeep was sent to CARSTAR West Auto Body in Denver, CO, owned by Jerry and Deb Robideau, where the makeover quickly began. Jerry himself completed most of the work. The body was straightened and a brand new paint job was put on the vehicle. Jason selected a dark blue color to match his father’s BMW. New tires and wheels, along with a brand new stereo system and other accessories were also added. Once completed, over $13,000 in repairs and upgrades went into the vehicle.

Jason was presented the car at a pizza party in front of a group of more than 30 people from his family, CARSTAR West Auto Body, and Make-A-Wish.

“We did a formal presentation, with the car hidden in the garage,” said Rigsby. “When you see that kid’s smile, and the mom crying, it was so worth it. It was just amazing.”

This was the eighth vehicle in the last five years that the Colorado CARSTAR shops have done for Make-A-Wish. All 11 area shops have helped out in some way throughout the years.