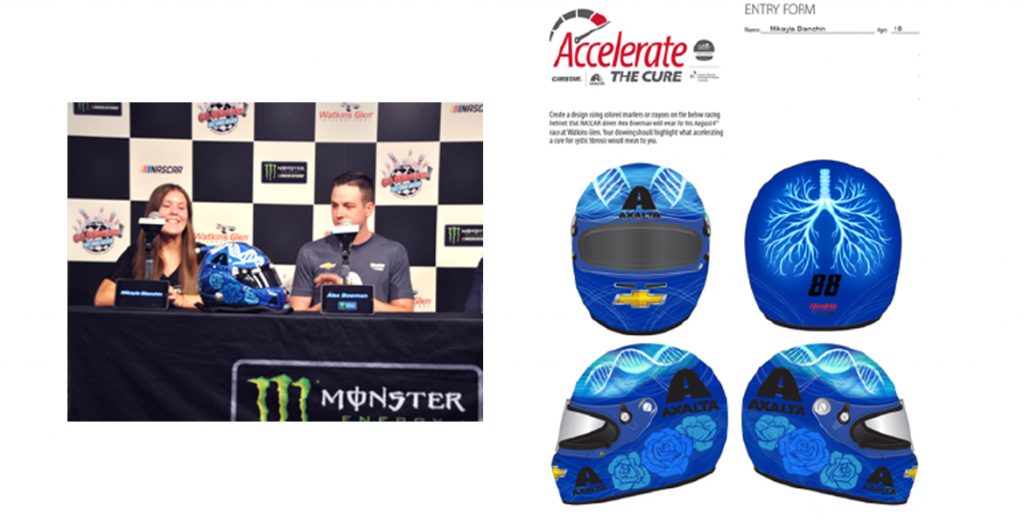 No. 88 Axalta/CARSTAR Chevrolet ZL1 Set to Race at Watkins Glen International on August 4 with

CARSTAR, North America’s premier network of independently owned collision repair facilities, is ready to race at the NASCAR Cup Series event at Watkins Glen International. This opportunity is thanks to a joint promotion with paint partner Axalta Coating Systems, which sponsors Alex Bowman and the No. 88 team at Hendrick Motorsports.

The No. 88 Axalta/CARSTAR Chevrolet Camaro ZL1 will race on Sunday, August 4, at Watkins Glen. The CARSTAR logo will be featured on the roof and television panel.  In addition, Bowman will wear a unique helmet in the race featuring a design created through the “Accelerate the Cure” contest for cystic fibrosis chapters across North America.  The winner of the contest – Mikayla Bianchin, an 18-year-old from Hamilton, ON – created a dynamic design featuring healthy lungs, the DNA helix that carries the cystic fibrosis gene and beautiful roses that reflect what a future without cystic fibrosis  (CF) would look like.

“Accelerating a cure would dramatically influence my life beyond belief,” said Bianchin. “The first feeling I imagine in a world without CF is easy breathing, something many people take for granted. As someone living with CF and having a sister with CF, I am familiar with deteriorating lung x-ray images, other patients’ post-transplant lung photos and preparedness of the decline of lung function. I have illustrated here bright beautiful lungs and bronchi thriving on their own, done in blue representing the blue aura light associated with clarity and calmness after a trauma. The first breath of clear lungs is what I look forward to most. I incorporated the roses as homage to the 65 roses story, about a young boy pronouncing ‘Cystic Fibrosis’ as ‘65 roses’. I believe this story to be a grand metaphor for the disease. Behind all the pain and struggles of CF patients there lies so much beauty and strength. I put the DNA design because I feel like that would be a target of research points for a cure. The DNA makeup of the cystic fibrosis gene and disease is the root of it all that creates and progresses the disease and could be the point of change. The disease of cystic fibrosis is taking too many lives that want to be lived. Life can still be great when you are going through times that seem terrible, but a cure for cystic fibrosis would be the most beautiful event I could ever see. A phenomenon so impactful that it saves thousands of lives, that is a day so beautiful I hope and pray is in our near future.”

CARSTAR has supported the fight against cystic fibrosis for more than 20 years, and through a variety of fundraising initiatives, CARSTAR, its owners, partners and employees have raised over $3.7 million for cystic fibrosis research, care and advocacy. For the Watkins Glen race, CARSTAR worked with cystic fibrosis chapters across the U.S. and Canada to host the “Accelerate the Cure” contest to design the special scheme for Bowman’s helmet.

The winning design was selected by representatives from Axalta, Hendrick Motorsports, CARSTAR, Cystic Fibrosis Canada and the Cystic Fibrosis Foundation. The winner is enjoying a special VIP race experience at the Watkins Glen race from August 2-4, 2019, including accommodations and suite passes for the NASCAR Cup Series race.

“We are proud to take the CARSTAR brand to one of North America’s top spectator sports with a young star like Alex Bowman, as he helps us raise awareness for our charity of choice – cystic fibrosis,” said Michael Macaluso, president of CARSTAR. “We can’t wait to see the No. 88 Axalta/CARSTAR Chevrolet on the track and share the CARSTAR story with millions of race fans.  Many congratulations to Mikayla on her winning helmet design and her outreach efforts to educate people about living with cystic fibrosis.”