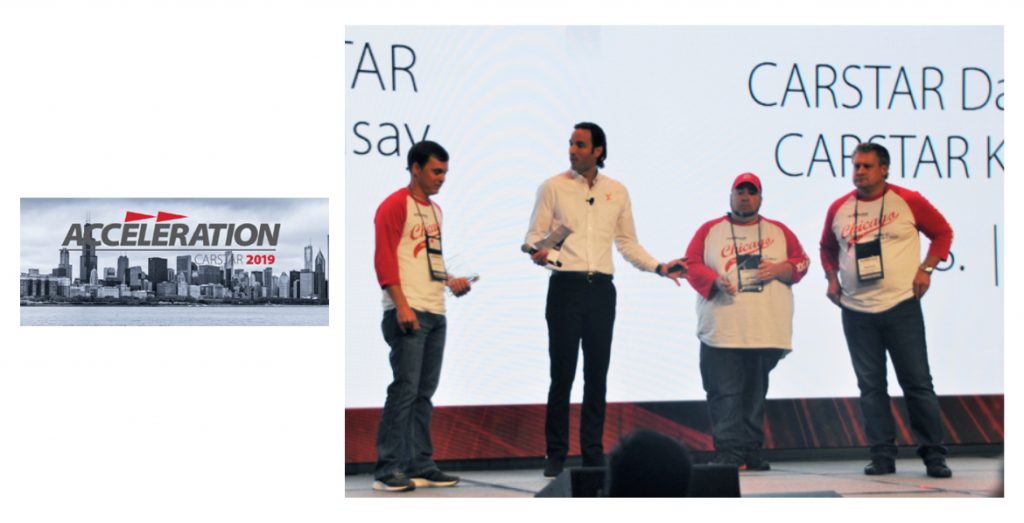 At its annual conference, CARSTAR recognized the U.S. and Canadian CARSTAR franchise partners of the year for their continued leadership and high performance.

Michael Macaluso, president of CARSTAR, and Dean Fisher, COO of CARSTAR, presented the CARSTAR Franchise Partner of the Year awards at the opening reception on Wednesday evening.

Franchise Partner of the Year is the highest award given in the CARSTAR system, and it celebrates the best of the best within the network. These two winners were chosen on criteria such as using preferred vendors, demonstrating a commitment to the EDGE Performance Platform, being brand compliant, submitting reports on time, delivering consistently high customer service and attending the annual conference. The winners included:

A franchise partner for almost 10 years, Jamie White, owner of CARSTAR Dalton South and CARSTAR Ken’s North, is focused on growth and solidifying CARSTAR’s footprint in his market with plans to open a third location later this year. When he took over the initial business from his uncle Ken White, he more than doubled its profits. In addition to his tremendous success in both performance and growth, White is engaged in his EDGE Performance Groups and hosted his first CARSTAR Soaps It Up car wash this year for cystic fibrosis.

Canadian Franchise Partner of the Year Goes to Paul Cross

Paul Cross, owner of CARSTAR Lindsay, CARSTAR Haliburton and CARSTAR Bancroft, did not start out in the collision industry, but embraced the CARSTAR brand as an extension to his existing dealership base. Quickly making a mark in his community by delivering leading KPIs and providing exceptional customer experience, Cross knows how to leverage the EDGE Performance Platform to his advantage. Also active in the CARSTAR advisory council -- CSAC, Cross brings an important perspective from the OEM side.

“These two franchise partners, Jamie White and Paul Cross, are the leaders of the CARSTAR brand now and for years to come,” said Michael Macaluso, president of CARSTAR. “Their commitment to excellent performance drives their success and the growth of our overall network. We’re proud to honor them with our CARSTAR Franchise Partner of the Year awards.”