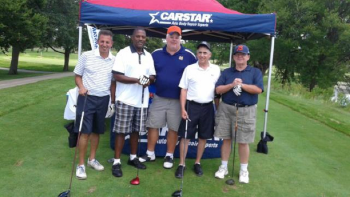 More than 200 golfers teed it up at the annual fundraiser. The golfers included American Family agents, corporate guests, and former Chicago Bears stars, many of whom were teammates of Otis Wilson on the 1985 Super Bowl Champion team.
“Otis saw a need in the community where kids were becoming overweight because they weren’t eating the right foods and getting enough exercise,” said Louie Santiago, Marketing Specialist for CARSTAR Chicagoland. “He found out that school athletic programs were not getting enough funding, so he rounded up his former teammates to have a golf outing and raise some funds for that purpose.”

The Otis Wilson Charitable Association (OWCA) provides and all-inclusive health and fitness program for at-risk youth to educate and empower them to lead healthy lifestyles.