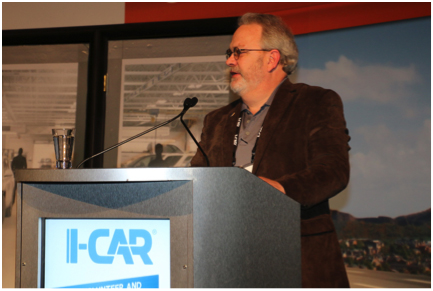 CHARLOTTE (March 31, 2016) – CARSTAR Auto Body Repair Experts is honored to congratulate Bob Keith for being recognized by I-CAR as the recipient of their annual Founders Award. The award was given based on his dedication and service to I‑CAR at the recent 2016 I-CAR Volunteer & Instructor Conference held in Orlando, Florida.

Keith is a member of the CARSTAR corporate team, serving as Senior Director-Operations Training, as well as the owner of four CARSTAR locations. He also has a long history of dedicated service to I-CAR, having held several leadership positions within the organization.

“It has been an honor to serve with some of the best minds in the industry who regularly take off their stripes in order to make sure that I-CAR meets its vision that every person in the collision repair industry has the information, knowledge and skills required to perform complete, safe and quality repairs for the ultimate benefit of the consumer,” said Keith.

Most recently, Keith was Chairman of the I-CAR International Board of Directors in 2014-2015. He has served in various roles on the I-CAR Executive Committee since 2008. Prior to becoming a board member, Keith spent many years as an I-CAR volunteer. He has also given much of his time to many other organizations throughout the collision repair industry.

Keith began his automotive career by attending Southeast Community College in Milford Nebraska. After receiving an Associate degree in Diesel technology he spent seven years with Caterpillar as a truck engine performance specialist. In the late 70’s, he turned his focus to the collision repair industry by forming Silver Hammer Body Co. with partner, Greg Peterson. After 37 years, the two are still partners and own two CARSTAR franchises in Nebraska and two CARSTAR franchises in Kansas.

Keith joined CARSTAR Corporate in company store operations in 1996 and took responsibility for the training and education department in 2009. In January of 2015 his role changed, and he now oversees all training involving CARSTAR’s EDGE Performance Platform.

“We are fortunate to have someone with Bob’s experience as part of our team,” said Michael Macaluso, President – CARSTAR North America. “His volunteer work with I-CAR and numerous other organizations has not only improved the industry as a whole, but has also helped all of our shops throughout North America deliver the best possible product to our customers.”