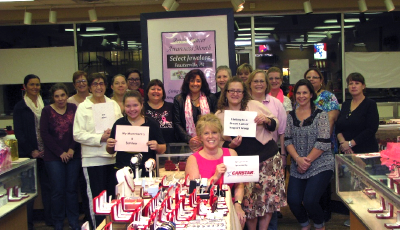 Breast Cancer Awareness and the popular October pink has found its way to merchandiser’s shelves, food packaging, professional sports team, and the community. Compassion for Breast Cancer patients is heightened as part of the awareness.

“Giving back to someone in the community and bringing the community together to do it is a recipe for just making it happen.” Said Dianna Yurko of Autocrafters CARSTAR Collision, corporate sponsor of events. “Offering local businesses the opportunity to get involved brings merchants together, pooling their resources and sharing budgets. This is the new B2B relationship marketing platform. It’s ‘live local buy local’ gone to the new level, give local! Our friends at Select Jewelers in Feasterville, Overstock Outlet, Edible Arrangements, Bucks County Breast Friends Support Group, AOH Division 88 Officer Danny Boyle, and residents of Feasterville came to help.”

On October 28, 2015, a fundraising event was held at Select Jewelers of Feasterville. The community stepped in to bring the evening into the spotlight. Jewelry Bingo was a smashing success. Having five in a row or four corners gives you the right to yell BINGO. All bingo winners leave with a jewelry prize. This ladies night fundraiser set out to raise $1,000 and was well on its way when a successful landscaping business of Dresher, PA paid forward the gesture of donating. Andrea Cocci Emig, fundraiser recipient, was facetimed in from her home 100 miles away. She greeted the guests she has never met. Andrea is 39 years old in stage 4 cancer. She has battled several cancers and lost her 42 year old sister to the same cancer last year. Andrea is one of five children, two of which have been or are cancer patients, a third is tested for the cancer gene. The event raised more than $1,200.00.