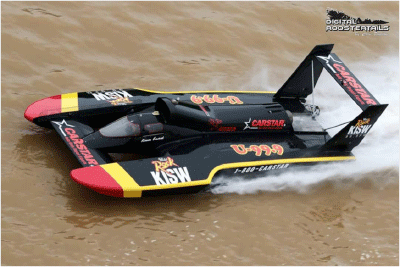 CHARLOTTE (July 26, 2016) – CARSTAR Auto Body Repair Experts is revving up the horsepower this year by sponsoring a boat for the second annual season in the H1 Unlimited Hydroplane boat racing series. The CARSTAR Puget Sound Business Group put together the sponsorship of the CARSTAR Powered KISW 99.99 Miss Rock hydroplane with radio partner U-99.9, which is piloted by Kevin Eacret.

Eacret has been racing boats for the past decade. He started his racing career in the stock 4-cylinder class, then moved up to stock V-8, before moving into blown alcohol big block boats. This is his second season running in the H1 Unlimited class, which features the biggest and fastest boats in the world.

“We had a good season last year running in H1 and this year is starting off even faster,” said Eacret. “When I took this on last year, she (the boat) had nobody. She had one guy with her, and he was the guy doing the gearboxes. I got together with a group of my friends and put together a crew and decided to take it on.”

Eacret’s Unlimited Hydroplane is powered by a Lycoming T-55/L7 Turbine engine out of a Chinook helicopter. The engine produces 3,000 horsepower, and will reach speeds of 200 mph on the 2 to 2.5-mile oval tracks on which the series races.

The race team, which was founded by boat racing legend Fred Leland, has already seen quite a bit of success this season. They took third in Madison, IN and will be racing in Detroit, San Diego, Pasco, and Seattle.

With two races on the schedule in Washington State, and with an event attendance of 150,000-200,000 spectators, it made sense for the CARSTAR Puget Sound Business Group to sponsor the boat.

“It’s a lot of exposure for us out here, especially during Seattle’s Seafair,” according to Kevin Parsons, who owns four CARSTAR locations in the region. “We have a great looking boat and a very competitive team. We’re looking forward to taking home some victories this season.”