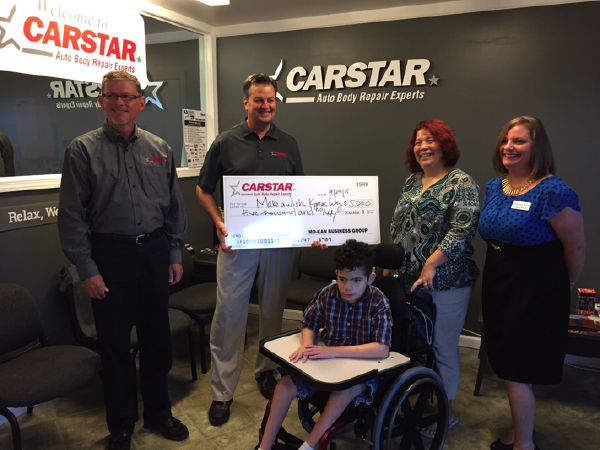 LEAWOOD, KS (October 19, 2015) – The CARSTAR Mo-Kan Business Group was able to make the wish of a Missouri teenager come true, thanks to the generosity of the Kansas City community and the Make-A-Wish Foundation of Kansas City. With a $5,000 donation from funds raised through the group’s annual golf tournament, 14-year old Dylan Lovell was able to go to Disney World, a trip that his family did not think was possible.

Lovell has a rare disease known as Moebius Syndrome Plus, a condition involving the cranial nerves that causes facial paralysis and poor lateral eye movement. The “Plus” in his diagnosis is something that was added by his doctors at the National Institute of Health because his medulla and pons are malformed in a way that keeps his brain from relaying signals to the rest of his body.

“Thanks so much for taking the time to support the Make-A-Wish organization and the wish of my son Dylan,” said Trina, Dylan's mom. “It means more to us than you will ever know. Dylan has spent much of his life in the hospital undergoing surgeries, procedures and test. Disney seemed like the perfect place for Dylan to have the time of his life. This trip is more than just a trip of a lifetime for Dylan. It's a chance for him to be a ’normal kid’ free from a little hospital room, armies of doctors, and scary needles. It's a chance for our family to spend a week of quality time together, which is something we haven't done in years.”

The CARSTAR Mo-Kan Business Group represents 14 auto body shops in the Kansas City metro area. They have a long history of giving back to their community through various charitable efforts, including their annual golf tournament.

“We're pleased that we were able to make our goal,” said Gerald Wicklund, owner of CARSTAR Wicklunds and chairman of the golf committee. “We hope that we can exceed or double that goal at our 2016 golf tournament.”